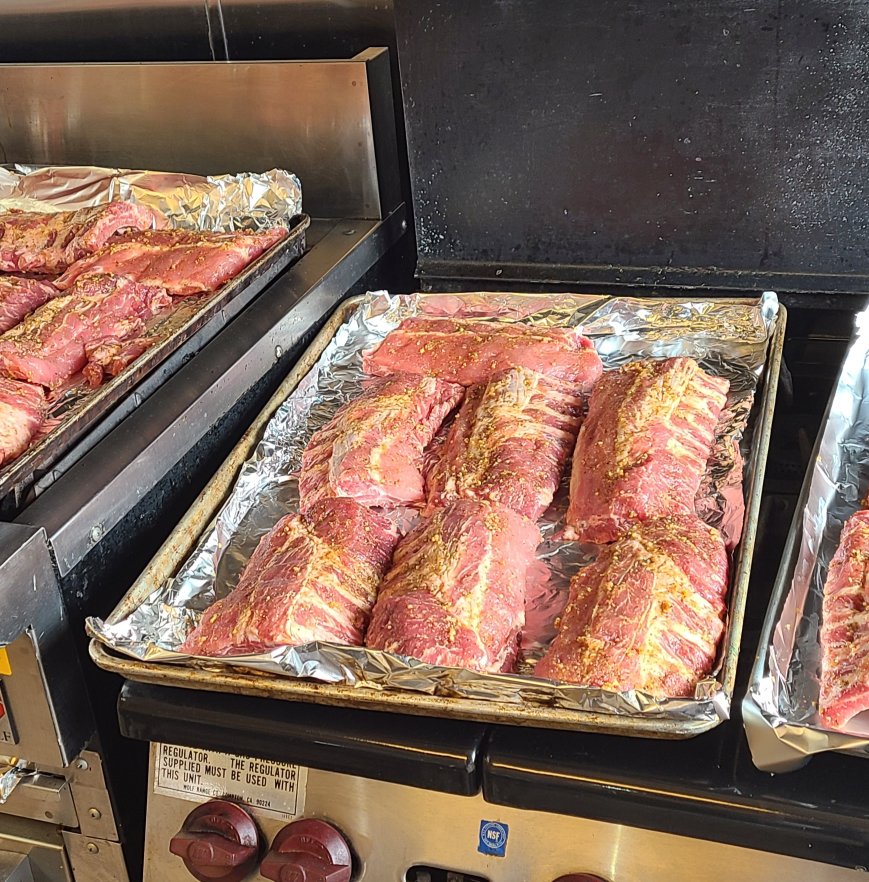 It is essential that you pick the right pieces of meat, apply the right amount of rub, cook them slowly to render fat and tenderize connective tissue, mop them to keep them from drying out, and caramelize a delicious sauce onto them.

For baby back ribs, the smaller the rack, the better. A perfect rack of baby back ribs weighs less than three pounds. Between two to two and a half pounds per rack is optimal. If you buy the three rack packs from Costco, aim for seven to eight pound packs.

Preparation is not particularly critical. You can cut the racks in half to make handling easier if you prefer. Removing the membrane, if you can, is a good idea. Often it isn’t possible.

Apply no more than one tablespoon of rub per pound of meat. Overseasoning the ribs will make them inedible. Generally, one level tablespoon per half-rack is perfect. Apply the rub mostly to the meaty side of the ribs, being sure to cover well.

Let the rub hydrate as the ribs come to room temperature.

Preheat your oven to 275 degrees. I recommend placing the ribs on disposable aluminum trays. If not, use aluminum foil to make cleanup easier.

I like to give the ribs one last quick massage to distribute and hydrate the rub just before putting them in the oven. Rub both sides.

The ribs will spend three and a half hours in the 275 degree oven, uncovered. Now you can concentrate on the mop.  The mop should first be applied after 40 minutes of cooking (to give the rub time to set and crust a bit) and then every 30 minutes.

A simple mop recipe is equal parts apple juice and apple cider vinegar. You can add some grape juice if you like. If you aren’t going to be using a smoky barbecue sauce, you can add a bit of liquid smoke to the mop.

You can just spoon the mop onto the ribs with a spoon if you like, but I prefer to use a barbecue mop or basting brush. Cover the tops of the ribs thoroughly each time you mop but try not to rub off any of the delicious crust you’re forming.

Once the ribs have been in the oven for three and a half hours, take them out. If desired, you can put the ribs in the refrigerator once they cool off and finish them later.

To finish the ribs, raise the oven temperature to 350F and turn your attention to the sauce. I prefer to buy a sweet barbecue sauce (sauces with “honey” in the name tend to work well) and add apple cider vinegar to it. If it’s not sweet enough, you can warm the sauce and add honey or dark brown sugar to it.

You’re looking to get a sauce that really hits you with both sweetness and sourness. If you aren’t getting the sweetness, add honey. If it doesn’t hit you with sourness, add more apple cider vinegar.

Once you’re happy with your sauce, cover the tops of the rib racks with it. Place them back in the oven for about 15 minutes. You’re looking for some caramelization of the sauce and glistening, sizzling fat. Watch carefully to make sure the sauce doesn’t burn.

Take the ribs out of the oven and let them sit about ten minutes before cutting them. The ribs can be reheated, just put some more sauce on them before reheating.