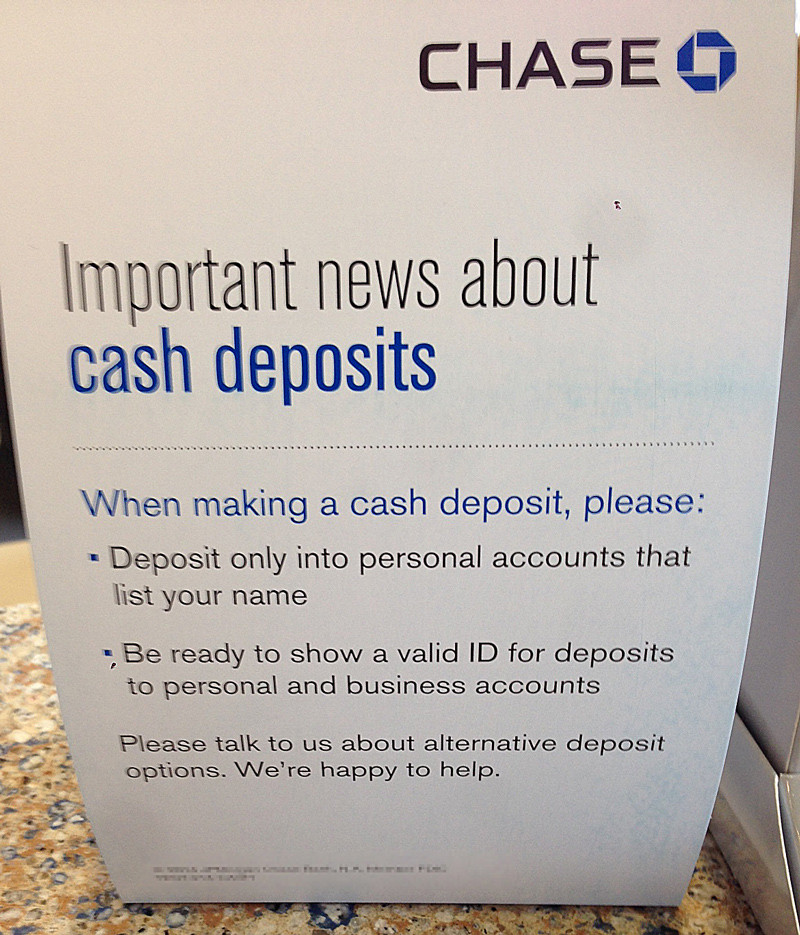 Recently, I posted a tweet, “The war on cash means you can buy a coffee if, and only if, an FI can make a profit on it.” The tweet was prompted by another tweet from a coffee shop that only accepts credit cards.

The justification for the war on cash is usually that cash is used by criminals and terrorists. Individuals are too hard to regulate, the argument goes, so instead we compel individuals to go through institutions that are regulated. Institutions are easier and cheaper to regulate, and the regulation will trickle down to the individuals.

Well, a lot actually. There are two main objections that I have to this system of indirect regulation.

The first is that it replaces a legal system that demands clear laws enforced with due process with vague guidelines enforced by a company’s arbitrary right to terminate any business relationship. Do you want to know what your FI thinks you did wrong? Well, good luck finding out. Do you want to find out why no bank will let you open an account? Well, they’re not going to tell you.

The second is that it makes innovation, whether in business or in lifestyle, much more difficult. I haven’t performed any more Coinbase transactions since Union Bank closed my accounts. I can’t afford to lose any more banking relationships. And there are hundreds of legal businesses that have either closed or not opened because they cannot obtain or maintain banking relationships, usually because the bank doesn’t consider the compliance risk of dealing with the unknown worth the money they’ll make from one customer.

Does this make sense?

I don’t think it makes any sense at all. And I have not yet met one person who thinks it does make sense, not a single banker, regulator, politician, or consumer. We have gradually worked our way into a system that no sane person would have designed from the beginning. It’s time to take a big step back and drastically change the way we regulate individual and business finance.

If we’re going to have rules, they should be passed by Congress, made by regulators, and be known to the public so that we can avoid violating them. We either need institutions that do not close people’s accounts for perfectly legal activity or we need to stop forcing people to use FIs.

You can’t both have a law that requires your house to be connected to the grid and let the electric company pick and choose its customers. Yet this is effectively what we have for FIs.

Imagine if we regulated food the same way we regulate finance. After all, we certainly can’t let people eat anything they want. Sugar gives kids cavities and diabetes. Fat makes people unhealthy. Improper food handling can lead to food poisoning.

First, we would need to do everything possible to discourage people from eating and cooking at home. After all, how can the government know how nutritious a home-cooked meal is, who it was fed to, or even that one was prepared at all? And how could we effectively regulate food safety in every home in America? It is impractical.

So we need to push everyone to restaurants. Regulation would restrict grocery stores, growing your own food, or home cooking as much as possible.

Now restaurants would have to know their customers, track their purchases, and report suspicious purchases to the government Want to take your kids out for ice cream? You had better eat at that restaurant as well. Otherwise, they’ll have to file a report. And then when they decide that you’ve made them file too many reports, they’ll just ask you never to eat there again — nothing personal, it’s just business.

That is, effectively, what banks are forced to do today.

In the United States, I have the Constitutional right to say that I might have murdered ten men in Perth in 2005. I can say it to everyone I meet. People can opt not to interact with me if they’d prefer not to hear it. They can report it to the police, and the police might investigate. That investigation might inconvenience me in many ways. But at least they can’t send me the bill for their investigation.

Now imagine if there was a law that required anyone who heard something that suggested a person might have committed a crime to investigate that at their own expense and send a report to the government. Failure to properly investigate or accurately report would be severely punished. What would happen?

Effectively, that would eliminate my right to say anything that would arouse suspicion in a reasonable person. Because if I did that, people would have no choice but to avoid me. The expense and risk of investigating everything I say would be crushing otherwise.

The war on cash has made banking an essential service. Through specific policy choices, we have made it as difficult as possible to live without paying someone else to hold your money. But we have also imposed on those who hold other people’s money an obligation to investigate anything suspicious at their own expense. This becomes an effective ban on anything suspicious. That is, as consequence of our deliberate policy choices, we have punished people for, and all but prohibited people from, using their own hard earned money in any way that financial institutions might fear might be deemed suspicious by the government.

Please take a moment to let that sink in.

The part I blame on FIs

FIs, like the rest of us, have to live in a world that is not of their own making. They are not charities and I cannot blame them for terminating unprofitable customers. However, that decision has the effect of denying people a service that our society has made essential.

When Union Bank terminated my accounts, I asked them why. They said they could not tell me. I asked them if any law or regulation prohibited them from telling me and they said no. That is, they can tell me, they simply chose not to. The rationale is that if I knew what they considered suspicious, I could avoid it.

That is Kafkaesque nonsense. It means I have to avoid anything that I fear might trigger their decision. And as far as I know, nothing requires FIs to act this way.

To be clear, I am not asking them to disclose what behavior they consider suspicious. I don’t care why their compliance department chose to look closely at my account. What I want to know is what behavior they felt justified denying me an essential service, that is, why they made the decision to close my accounts. There is no reason I can imagine why that rule has to be secret.

It’s entirely possible that Union Bank closed my account due to some simple misunderstanding I could trivially clear up. But I’ll never know if that’s the case. And unless they can show me some law or regulation that requires them to act that way, the only conclusion is that they choose to act that way. They seem to choose not to give me a chance to offer an innocent explanation because they do not want to hear it.

4 thoughts on “The war on cash”