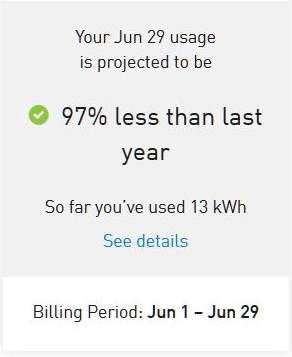 My solar power system has now been fully operational for one month. My electric bill is about $330 less than it would have been without the system.

In fact, for May, my total usage during peak times was -200 kWh. During partial peak, -97 kWh. My off peak usage was 265 kWh. Thanks to using energy when it’s cheap and producing it when it’s expensive, I amassed a $54 credit towards future usage while only having a net production of 32 kWh — about ten times what 32 kWh is worth.

Figuring very conservatively, my electric bills should be reduced by about $3,500 per year. It will probably be closer to $4,000 — and that’s assuming that neither rates nor my usage changes. That puts breakeven at 8 years.

The war on solar

Sadly, terms this fair are not available any more thanks to the electricity industry’s war on solar. People who add solar power systems to their homes now will not get as aggressive time of use metering as I do. Most likely they will pay higher interconnect fees and not be reimbursed 1-to-1 for power generated against power consumed. Worse still, these terms are currently up in their air as there is yet no agreement on what they will be, so people in California who invest in solar now have no idea what their terms are likely to be.

Utility companies argue that solar customers are not paying enough to cover the costs of maintaining the grid services they use. This argument rings hollow because residential electricity pricing has never been about paying for what you use but has always been about incentivizing conservation and manipulating behavior.

If we’re going to use prices to manipulate consumer behavior, certainly the thing we should most be encouraging is the addition to the grid of renewable sources of energy like wind and solar. Similarly, we should be encouraging the addition to the grid of time of use shifting systems such as the Tesla battery because these enable the grid to support more renewable energy and reduce the need for expensive, dirty “peaker” power sources.

While they do have some legitimate concerns about these green energy systems and grid maintenance and stability, their main real issue is perverse incentives industry wide. Your local grocery store will do anything they can to obtain the products they sell at a lower price. This allows them to charge more,  lower their prices without cutting profits, or both. For utilities, it’s often the reverse. Industry profits are tied to how much they pay for electricity. Solar customers and customers with battery systems reduce their total demand when energy prices are high, reducing what electric companies pay for electricity, and thus reducing the profit electricity producers can make.

We are right on the cusp of newer, cheaper, integrated systems that combine huge amounts of solar power production with time of use shifting to reduce peak demand. Meanwhile, big solar and the existing electricity production and distribution companies are fighting it out in the political arena. If we care about global warming, reducing the cost of energy, and having a stable, reliable power grid, we should want the solar companies to win these battles — at least for now.