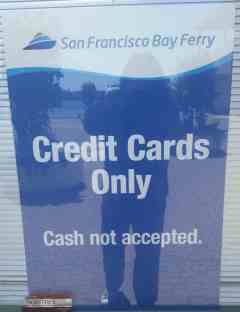 Governments around the world are deliberately making it as difficult as possible to use cash. At the same time, financial institutions are cooperating to refuse service to customers for shocking reasons, for example, that corrupt regimes have designated them “terrorists” just because they oppose that regime.

There is no question that there is a war on cash. In the United States, large transactions are already almost impossible to conduct in cash because the largest bill is too small. And it’s still too big for some people. Several European countries have already banned “large” cash transactions.

The explicit goal is to make it more difficult for people to evade taxes or launder money. But the mechanism is explicitly the elimination of financial privacy.

Banks can be fined or sued when they enable illegal activity. Banks react to this threat by “derisking”. That is, they avoid customers that they thing have an elevated risk of being involved in money laundering or terrorist financing.

Organizations such as Thomson Reuters operate lists of individuals and organizations that are accused of having some link to terrorism, money laundering, or drugs. Their terms of service prohibit the media from accessing these lists, prohibit their customers from divulging the role of the list in their decision making, and ensure that there is no way to appeal false information.

This means that corrupt governments can deprive their political opponents, even charities, of access to banking services merely by accusing them of terrorism. Targeted organizations will find that no bank will open an account for them.

Nobody has any responsibility here. The lists just provide information. They don’t advocate that anybody take any particular action in response to that information. The banks just follow the lists. There is no way one account can generate enough revenue for them to justify the cost of investigating the accuracy of the information or the risk that someone will sue them for opening a bank account for a suspected terrorist.

You might think that a local bank could investigate a specific case and decide to ignore a politically-motivated, bogus terrorism designation by a corrupt government. But you would be wrong. Local banks can only survive because of their relationships with larger banks, and larger banks will not maintain a relationship with a small bank that does business with someone a government has claimed has links to terrorism — the large bank has branches, offices, and assets inside that government’s jurisdiction.

In a previous article, “The war on cash“, I suggested a policy change to improve this situation. I’d prefer to see major structural changes and actual respect for financial privacy, but that seems like too much to ask for.

This rule would provide them legal cover should anyone ask them why they provided banking services to someone who has been the victim of bogus accusations. But most importantly, it would protect them from extraterritorial pressure to cut off service to customers based on secret “evidence” from corrupt regimes that apply pressure through financial institutions in their jurisdiction. “Our regulators don’t allow us to cut off service to a customer just because your regulators say we should” would be their answer.

Every year, hundreds of entirely legal businesses either close or don’t open because they can’t keep or maintain the banking relationships that explicit government policy requires them to have to do business. This is often the result of a simple business decision on the part of the bank — servicing innovative businesses may cost a bit more or involve a tiny bit more risk of a lawsuit. If an FI can’t make a profit on your business, your business cannot exist. That’s intolerable.

You cannot have a situation where you both use the law to compel people to purchase a particular service and permit the providers of that service to pick and choose their customers arbitrarily. This crazy combination of policies is hurting people and hamstringing innovation. Something needs to change.

One thought on “The global war on cash”